Sarri sheds his stubborn style at Juventus and finds success 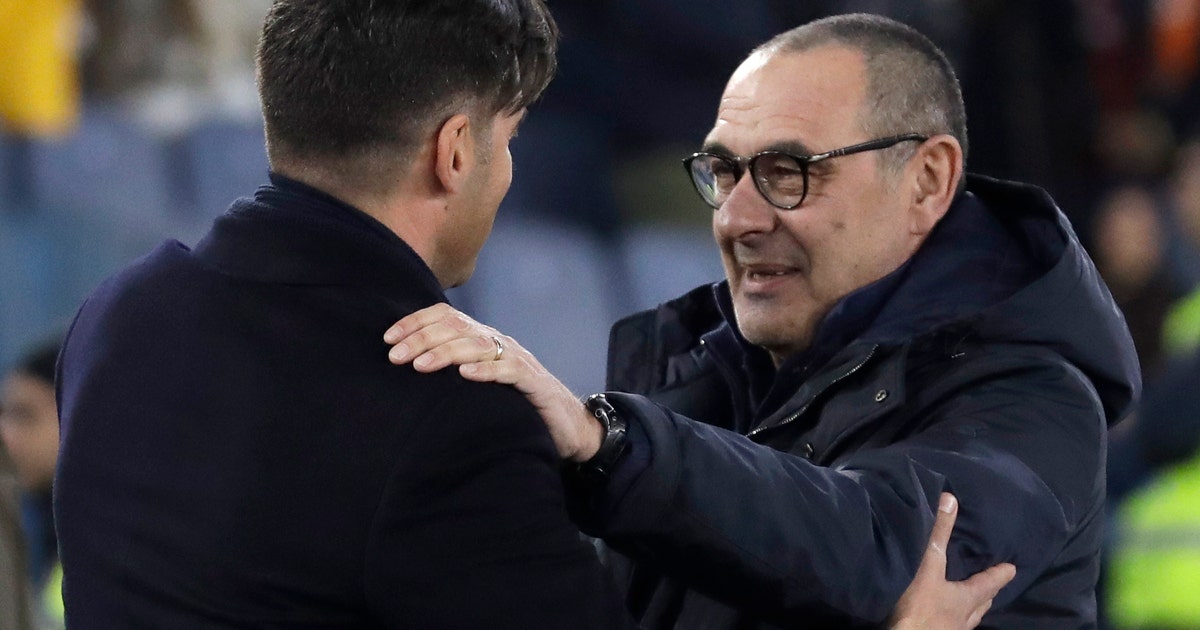 ROME (AP) — Maurizio Sarri must have learned something from those awful losses midway through last season at Chelsea, when he was getting ridiculed for stubbornly sticking with his highly technical passing system.

Or from those near misses at Napoli, when his teams twice were on top at the league’s midpoint only to miss out on the title on both occasions.

Half a season into his tenure at Juventus, it’s often been difficult to discern traces of “Sarri-ball,” the style of mesmerizing short, vertical passes that boosted Sarri to prominence first at Empoli then at Napoli.

Yes, there were the now-famous 24 touches before Gonzalo Higuain’s winner against Inter Milan in October; but there was also a gritty 2-1 win at Roma on Sunday when Juventus stormed out to an early 2-0 lead then almost fell apart near the hour-mark before holding on for a potentially decisive victory that sent the Bianconeri two points clear at the top of Serie A.

After the game in Rome, Sarri was asked if he felt his current side plays like his previous teams.

“This is a team which is not particularly brilliant from a physical point of view. They don’t have the characteristics that Napoli had in regard to the ability of moving the ball in close spaces. This is an incredibly strong team from other points of view.”

With the likes of Cristiano Ronaldo in attack plus Leonardo Bonucci and Matthijs de Ligt in defense, Juventus possesses more talent than any other squad that Sarri has coached.

“If with my Napoli we had defended in the last 25 meters for the last 25 minutes as we did tonight, we would have lost, that’s for sure,” Sarri said. “So, this team has different qualities and if I tried to re-do what I already did in other teams, I would be coaching myself, not the team.”

Another key difference from his previous teams is that Sarri now appears much more willing to rotate his players from game to game — unlike when he relied on the same starting 11 and same two or three substitutions for nearly every match with Napoli.

“At Napoli it was important to provide continuity,” Sarri said last week. “At Juve it’s totally different from my past experiences. Considering the quality of the players, when you change two or three of them it might change something in terms of individual characteristics but not much in terms of the playing philosophy.”

Roma midfielder Nicolò Zaniolo cried on the pitch after tearing the anterior cruciate ligament in his right knee during the loss to Juventus.

The 20-year-old Zaniolo is considered Italy’s most talented young player and the injury will almost certainly rule him out of the Azzurri squad for this year’s European Championship.

Fortunately for Italy coach Roberto Mancini, midfield is the position where Italy is strongest. Marco Verratti and Jorginho have been consistent starters for the national team while other options include Lorenzo Pellegrini, Nicolò Barella, Stefano Sensi and Sandro Tonali.

Riding a club-record 10-match winning streak, Lazio’s ability to transform matches in the final minutes has been decisive.

Including Ciro Immobile’s 82nd-minute strike in Saturday’s 1-0 win over Napoli, Lazio has scored 13 of its 41 goals in the last quarter-hour of its matches — translating to six games won with late goals.

Aiming for its first Serie A title in two decades, Lazio is in third place, six points behind Juventus and four behind Inter Milan with a game in hand.

The Roman squad also recently won the Italian Super Cup with its second victory over Juventus this season.

Inter close in on Giroud

Last Updated: 12/01/20 11:46am Olivier Giroud’s Chelsea contract expires in the summer Inter Milan are close to an agreement with Chelsea over a deal for Olivier Giroud, according to Sky in Italy. More to follow… New Year, same Super 6! FREE TO PLAY: Do not miss your chance to land the £250,000 jackpot for the...

LA Galaxy in talks for Hernandez

Last Updated: 13/01/20 11:53am Javier Hernandez has only scored one La Liga goal for Sevilla LA Galaxy are in talks to sign former Manchester United and West Ham striker Javier Hernandez. The MLS club have agreed a fee of around £7m with La Liga side Sevilla for the 31-year-old. Galaxy are after a replacement for...

Canisius (8-11, 3-5) vs. Fairfield (7-11, 3-4) Webster Bank Arena at Harbor Yard, Bridgeport, Connecticut; Sunday, 2 p.m. EST BOTTOM LINE: Canisius seeks revenge on Fairfield after dropping the first matchup in Buffalo. The teams last went at it on Jan. 5, when the Stags shot 37.3 percent from the...